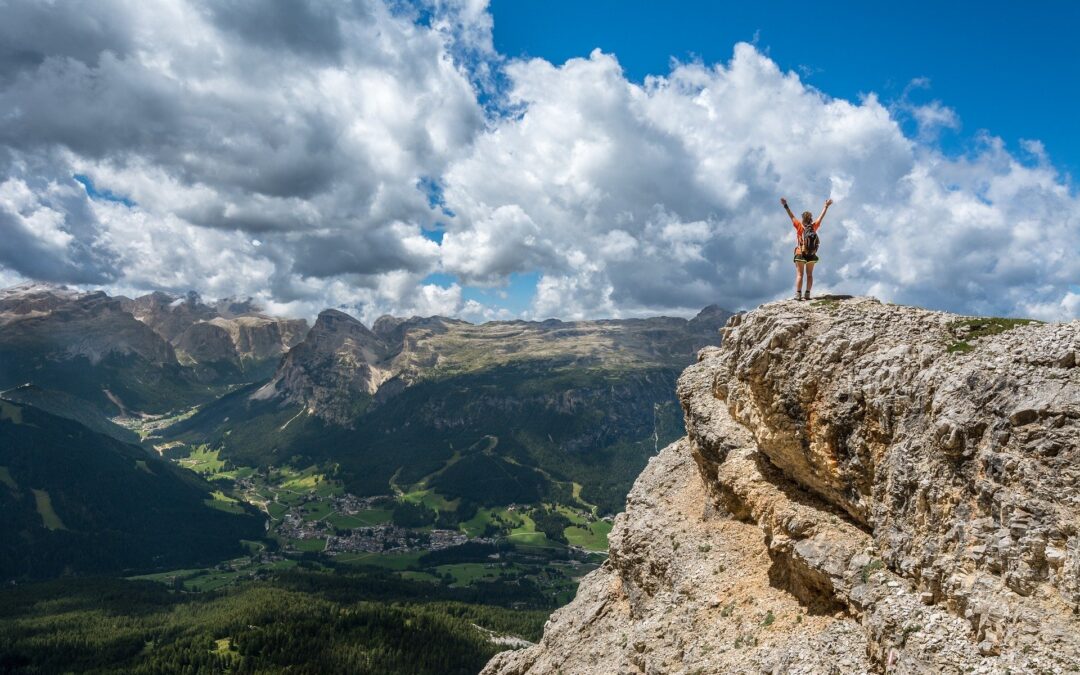 As kids, we are so creative. We are dreamers. We do not yet have a limiting set of beliefs cemented into our brains. We have minimal fears, until we are told that we should be fearful of something. When we are kids, we honestly believe that anything is possible for us in life. Because, we just don’t yet have all the doubts and societal norms and expectations ingrained into us yet. And at that age our brains are also very good at interpreting things incorrectly!

That’s why so many kids say they want to be astronauts, doctors, vets, pilots, fire fighters, elite athletes, or even the Prime Minister – all the jobs that most adults don’t consider going into, because they’re hard, they’re tough, they’re a lot of work, they’re dangerous, out of our league, or in the case of an astronaut, they’re just out of this world!

As adults, we think we have a more realistic expectation of ourselves and we are told, either by ourselves or others, not to dream the silly pipe dreams. We are just normal, ordinary people and those jobs are for exceptional people. Not people like me. … because I’m not ‘something enough’.

So, we don’t follow the dream of the big, amazing, audacious career and we settle for a regular old job like most other people around us. And this doesn’t have to be for jobs either. This could be about reaching an elite level of sport, or following your passion of acting or singing, or of conquering Mount Everest.

But, more often than not, we are not happy with the thing we settle for. Because it’s not our true passion. It’s not what does, or would, light us up.

But, just because we gave up on our seemingly “silly” childhood dreams long ago, doesn’t mean we can’t have them now, or that we can’t have new big dreams now.

I can remember a time in my 20’s when the thought of actually owning a brand new car was something that was way out of my league. I would never be able to buy a brand new car. It was such a big deal at the time. But I look back now, many, many cars later, and I have only bought brand new cars for about the last 10 years and I don’t even think about it now, we just do it.

I also remember many years ago, thinking that I would never be in a position to buy a house, let alone a house that cost above average. But I am and I have bought several houses over the years now.

I remember the thought of going to university seemed so far out of my reach. I mean, my tertiary entrance score at the end of high school was the lowest possible score, so there was no way I could go to uni. But, 10 years later, I re-sat that tertiary entrance exam, got an awesome score and went to uni and completed a degree.

And running a business. This was one of the scariest things ever. Not something younger me ever thought would be an actual reality (a pipe dream maybe, but to do it for real?? Nah!) and yet, here I am running two businesses.

These are all things that millions of people had done before me, and yet I didn’t think I could do them. But why? Why did younger me think I couldn’t do these things?

Well, it was all my subconscious programming. It was a combination of a few things actually.

So, we grow up with all these limiting beliefs about what is or is not possible for ourselves, based on our childhood experiences. Which is why I am trying to teach my own daughter that she can do anything she wants (except jump off 10 foot high water tanks and fly!), because I don’t want her growing up with limitations on her possibilities.

Another thing that holds us back from dreaming big is fear. These could be fears that you are openly aware of, like you had a dream to be a pilot, but you have a fear of heights. Or these could be fears that are so ingrained into your subconscious brain, that you don’t even realise they are there and if you do, you don’t see them as fears, you may see them as beliefs.

Remember, our subconscious brains have one job and that is to protect us from everything. So if we perceive that something is going to be hard, in most cases, our first instinct is to not do it, or to take shortcuts or try doing it differently, because our subconscious brain is trying to protect you from the hard thing. Fear is there to protect us no matter what – in some cases rightly so, but in others, the fear is completely unwarranted.

Change is one of those hard things that our brains tries to protect us from and the main reason for that, is that our subconscious brain likes to be efficient, which is a nice way of saying it is lazy. It likes repetition and doesn’t really want to do all that work of creating new brain pathways when you’re learning or doing the new or hard thing. This is one of the big reasons why we self-sabotage and procrastinate. It’s our brains way of saying “wait on … let’s just look at this bright shiny pretty light over here and deflect from what’s really going on, because I can’t be bothered with the change and the hard work and the displeasure of the new thing”.

But, if we thought like that about every single thing in our lives, then we would still be crawling, because we wouldn’t have learned to walk, which is one of the hardest things we had to do as infants.

Once you mastered that new knowledge and that new skill, your brain locked it away, through it’s process of myelination and didn’t worry any further about that skill or knowledge, because you were now confident and competent.

Which is the same for anything in our lives that we think we just can’t do. As I said earlier, if someone else out there has done it, then there’s no real reason why you can’t too.

The only thing stopping you is your stories. All the stories and excuses that instantly pop into your head as to why you can’t do the thing that you’re thinking of right now.

Many people dream of writing a book, but don’t and often the reason is, because “I can’t”.  Why can’t they? Is it because they can’t read or write? Well, there’d be ways around that with scribes, etc. Is it because they don’t have a story to tell or don’t know what to write about? Many published authors sat at their computers with blank-screenitis, not sure what to write about, but they just started writing. Is it just because you know you could write a book, but you’re afraid it’s going to be shit and therefore you don’t bother? This is common too and comes back to what I have spoken about previously, of caring too much what other’s think and perfectionism.  So what if you publish it and it’s not a New York Times Best Seller? At least you’ve done it and you can do it better next time. So many of the really, super successful entrepreneurs of our time had multiple failures before they succeeded. We can all do something, it’s just that some people do it way better than others!

The point is that you can dream big and you can do big things. Huge things even.

We all have choices in life. We can choose our thoughts and we can choose how we respond to situations. By raising our level of consciousness, taking a birdseye view of our life from above, rather than being stuck in the muck, we can step into our higher selves and create new realities.

So, dreaming big doesn’t have to be as scary as it feels. When I first started my Coaching journey, I had no idea where it would take me. I just assumed that I would coach a few people 1:1 and make a small difference to a few people. I did not know that I had a sacred duty to do something amazing in this world, to change lives. To make an impact on the world, by helping women peel back their layers to discover their true potential, to reveal their individual magnificence and create their best life possible. I didn’t know any of that when I started. I did not know that this was in fact my life’s purpose, next to creating my family.

The evolution of my brain is and always will be a work in progress. I love learning and self-development and creating new possibilities for my life. I am so excited and scared for the vision that I have created for my future. It is big, it is hairy, it is audacious, it is out there, but had I not done all this work on myself over the last couple of years, this vision would not seem at all realistic. It would just be words on a page. But it’s not, because alongside the fear, I am feeling the excitement and I’m letting them coexist for the moment, allowing my brain the time it needs to assimilate this big, new vision, so that in time, it’ll just be a walk in the park, or a drive in the car.